Are We Just Going To Pretend Elon Musk Didn’t Get Flight Attendant Nude...

Fantasy Football 101: Rams’ Matthew Stafford was the only QB with 50 passing...

How important is a coach in determining the success of your team? Look no further than the Jacksonville Jaguars and their recent firing of head coach Urban Meyer. What a disaster. I’m not an X’s and O’s guy but I’d say that missing your team’s flight home to fool around at a bar, kicking your players, and calling your coaching staff a bunch of losers is not a recipe for success. I could do an entire Friday Five of the worst moments of Meyer’s tenure with the Jags, and he only lasted 13 games.

The Meyer in Jacksonville saga is obviously a nightmare scenario, but even having a coach whose just okay might not be enough when push comes to shove. Sure, holding the clipboard doesn’t seem as crucial to a team’s success as driving in runs or putting pucks in the net, but the difference between even an average coach and a great one can make all the difference.

This is a first.. Manager Charlie Montoyo serenading his guys during BP. #BlueJays pic.twitter.com/cG5NPmT3EE

If you’re eyeing championships, you need a proper captain at the helm. Someone who can motivate your players, make the right personnel decisions, and do the right thing at the right time. As a fan, I don’t need my coach to bite off their opponent’s kneecap, but at the very least I’d like someone who knows when to call a timeout or make a call to the bullpen.

This Friday Five is a tribute to the best head coaches in Toronto sports history. There haven’t been many banners hung recently in this city, but there have been some good coaches nonetheless. Pinball Clemons is a guy I wish I had gotten to see when he was in his prime. Not just as a player for the Toronto Argonauts but as their coach as well. Not only was he both electric AND hilarious, but he could give a speech that would make anyone run through a brick wall. Pinball was the soundbite king.

Pinball probably wasn’t the greatest coach in Argos history, but I put him on this list because everyone needs a reminder of the character he was and still is. He did lead Toronto’s football team, which I sometimes forget we have, to a Grey Cup championship in 2004 to cap off a .578 winning percentage and 11 playoff games in his second coaching stint. Clemons is currently the GM of the Argos, and maybe as a city we’d collectively care more about our CFL team if Pinball’s infectious personality received more exposure. Is John Gibbons truly a top-five coach in Toronto sports history? Well that depends on how you define greatness. He did have two different stints managing the Blue Jays, reaching the postseason twice in back-to-back seasons which earned him a Sports Illustrated cover. But is a career .501 win percentage great? Not really. Did he win any championships? Nope. How ’bout a pennant at the very least? Nah.

John Gibbons had a good couple of runs with the #BlueJays. He also got ejected a bunch. Enjoy. pic.twitter.com/vgYz7zj8AM

But you know what DOES make Gibby great in my humble opinion? His interviews with that sweet Southern accent as he’d lean back in his chair. His waddle to the mound when he was about to make a pitching change. And of course, his knack for getting ejected. Sometimes you can’t measure greatness, but Gibbons ranks 13th all-time in manager ejections, which has to count for something. I loved Gibby and I’m sure I’m not the only Jays fan that misses him. He’ll always be great in his own way. 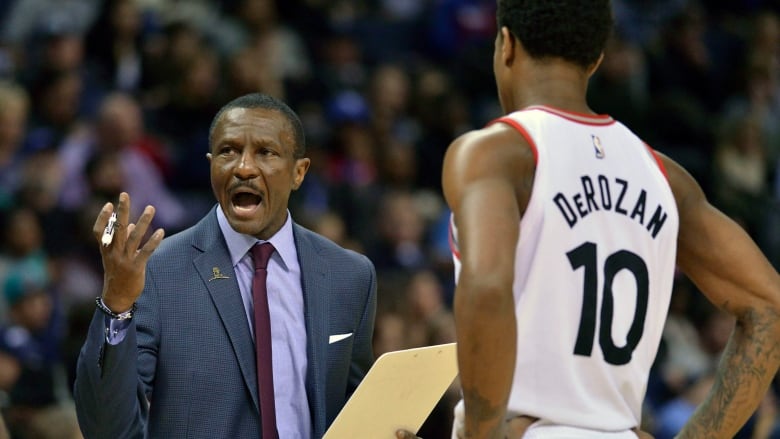 Dwane Casey had one hell of a run with the Toronto Raptors. He was handed a team that lost 60 games the year before he was hired and turned them into a well-oiled machine, making the playoffs in five consecutive seasons and ultimately winning the franchise’s first NBA ‘chip. Casey was let go the season prior to the Raptors’ title run, but there was no denying the impact he had on that championship team.

While it was Nick Nurse, and more importantly Kawhi, who led this team to the promise land, I don’t know if they get there if Nurse and this roster weren’t under Casey’s wing all those seasons leading up to 2018-19. He has more than twice as many wins as the next-best Raptors coach with 320, and was named the NBA Coach of the Year on his way out.

The only thing that bugs me about Dwane Casey is the vengeance he’s unleashed on the Raptors since he became the head coach of the Detroit Pistons. They’ve been perenially one of the worst teams in the NBA—and Casey isn’t to blame for that, they just suck—but somehow they always seem to lay a whoopin’ on the Raps. I don’t blame Casey for airing out his grievances after he was let go following his COY campaign and just before the Raps won a title, but c’mon man, take it easy on us once in a while.

You won’t find me praising anyone associated with the Toronto Maple Leafs often, but I couldn’t do this Friday Five without mentioning the late great Pat Quinn. Given the incompetency of this team since they last earned any hardware over a half-century ago, Quinn’s Leafs were relatively successful as they had a .591 winning percentage under his reign. His last win with the franchise was also his 300th, and he brought them to a pair of Conference Finals appearances.

The Leafs’ head coaching position has been a revolving door ever for as long as I can remember, but Quinn manned the helm for seven seasons which is the longest anyone has done it since Punch Imlach, the most recent Leafs coach to win a ring. As if you didn’t need another reminder as to how long it’s been since this team has won a Stanley Cup, the last coach they won one under was named Punch. Maybe that first name will come back around the next time they win one. There should be little contention here. Cito Gaston was a legendary manager, leading the Jays to their first-ever World Series championship in ’92 and followed it up with another one the following season. He became the first black manager in MLB history to win a World Series, and is the all-time winningest manager in club history. Cito first became the skipper in ’89 and was a key part in elevating this ballclub from ringless to back-to-back champs.

Does Cito Gaston belong in the Baseball Hall of Fame? He certainly has a case. What I do know is that Gaston is a larger than life figure in Blue Jays lore. I sure hope he’s never had to buy himself a drink in this city over the last thirty years.