I’ve gotta admit, baseball isn’t so fun when the Blue Jays aren’t playing. I felt caught off guard when the season ended so abruptly because I was convinced that this ballclub would still be playing come October. That didn’t happen, but even though the Jays didn’t make it to the dance I’ve still managed to watch a ton of this postseason. It’s been interesting so far, characterized by a lot of upsets and even more pitching changes, and I’m looking forward to this Fall Classic we have kicking off this Tuesday. In case you haven’t been following the postseason as closely but still want to tune in to see which team gets crowned the 2021 champion, I’m here to set the stage for you in this World Series matchup between the Altanta Braves and the Houston Astros.

The 2021 World Series is set 🏆 pic.twitter.com/j0C5gXIVPX

how did the Atlanta Braves get here?

You could say the Atlanta Braves have been knocking on the door to get into the World Series for quite some time now. The Braves have won the NL East four years in a row, doing so this season with an 88-73 record, which I’m obligated to mention is three wins fewer than the Jays had. Atlanta stepped it up down the stretch, posting a .611 win-loss % post-All Star break — which again, is a lower mark than the Jays, but lucky for the Braves they don’t play in the AL Beast —thanks to some key trade deadline pickups orchestrated by none other than Alex Anthopolous.

As soon it was announced that their young star, Ronald Acuña Jr., would miss the rest of the season with a torn ACL, the former Blue Jays general manager made some calls and completely revamped the Atlanta’s outfield. None of Eddie Rosario, Adam Duvall, Joc Pederson, and Jorge Soler were on this team in June, yet the first three have been among their five best hitters this postseason while Soler has been reinstated off the COVID list just in time to DH and hit some absolute tanks. AA is such a finesser that he acquired Rosario, the NL postseason leader in OPS, from Cleveland in exchange for a 35-year old, negative-WAR tubagoo in Pablo Sandoval. In Acuña’s absence this club’s been doing just fine, having hit the most homers in the NL post-All Star break led by 2020 NL MVP Freddie Freeman and third baseman Austin Riley.

Their pitching has done well enough to keep them in games, surrendering two runs or fewer in six of their ten playoff games. Staff ace Max Fried was lights out in his first two starts, while Charlie Morton still has some of the nastiest offspeed stuff you’ll ever see. But their best pitcher under the bright lights has been reliever Tyler Matzek, who has nothing but ice in his veins. He was called upon in some big moments in the NLCS against the Los Angeles Dodgers and was lights out. His 11 strikeouts with runners in scoring position is tied for the most ever by a reliever in a single postseason, and he also has a phenomenal nickname.

The Braves were slept on heading into October, but they’ve managed to prove all of the doubters wrong despite missing their best player. They took down the 106-win Dodgers, and this is a team that’s built for success.

More importantly, how did we let the Houston Astros get here? 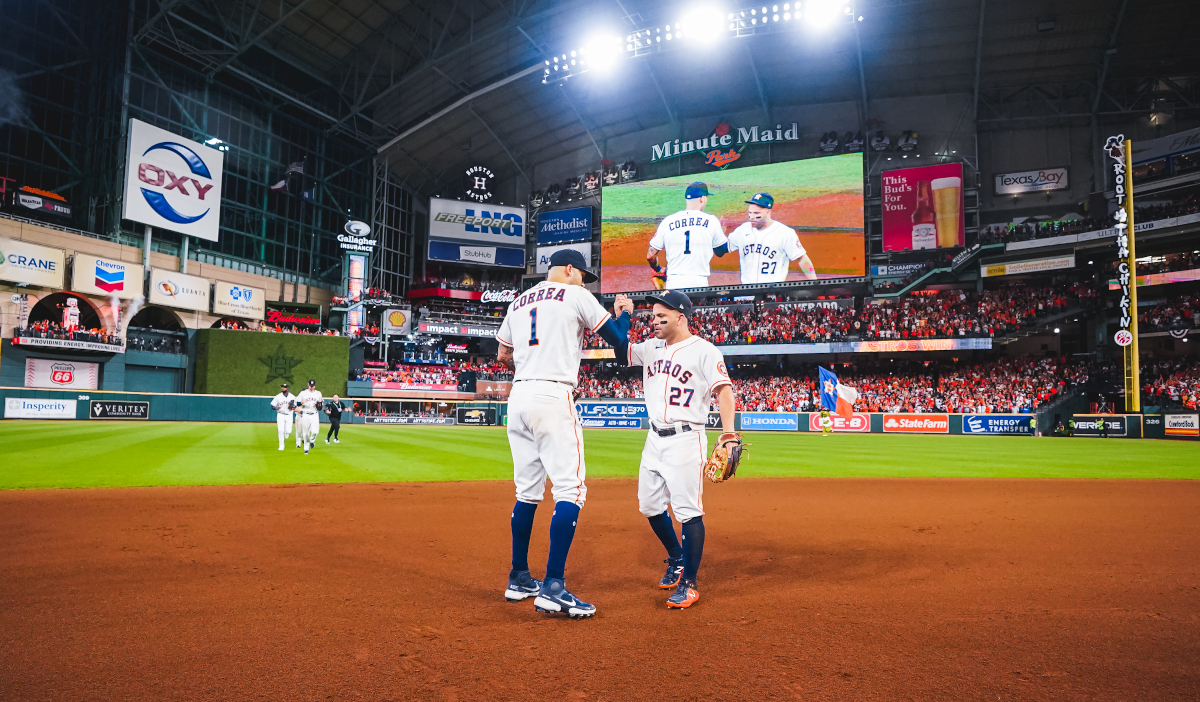 Part of the reason why I haven’t been so inclined to watch the playoffs this year is because I knew I’d be hate-watching every American League matchup. Without the Jays in it, it became clear that I’d be cheering for whichever NL team made it to the World Series. I despise the Houston Astros after their cheating scandal in 2019, but there’s no denying that they aren’t here by a fluke. They’re still a wagon, and it’s not because of some beat-up trash cans.

The Astros took care of both Sox on their way to the big dance, taking down two tough clubs thanks to an insane amount of depth. They won the AL West with a 95-67 record, having scored the most runs in all of baseball. This is a team that had a top-five offense AND pitching staff this season, and they brought their tenacity with them to October in the form of a chip on their shoulder. These guys have been hated on by the other 29 fanbases this season, and they’ve played their cojones off to show us all that they don’t need buzzers to be good.

The ‘Stros have a roster full of guys that give the opposing team problems. Carlos Correa, the third-most valuable player this season and undisputedly their biggest villain, is one of the most clutch hitters in the game. And even while José Altuve and Alex Bregman have struggled this postseason they’ve been picked up by Yordan Alvarez and Yuli Gurriel. The 37-year old Gurriel, who’s tied with his brother Lourdes for the best hair in the game, has been raking out of the 7th spot in the order. Meanwhile, Alvarez has been the best hitter this entire postseason, with an INSANE .522 batting average and league-leading OPS.

Houston will be playing in their third World Series in five years, and they do whatever it takes to win games. Their starting pitching hasn’t been great this postseason, but their relievers have stepped up and has done well while handling the bulk of the innings. Their ace Lance McCullers Jr. is banged up and might not be able to pitch in the World Series, but it’s hard to bet against this team with how loaded of an offense they have.

Who has the edge?

It’s safe to say no one expected this matchup. The Astros are the favourites to win it, but if McCullers can’t go their starting pitching is gonna be outmatched. Bullpens have been the craze this postseason, which has caused games to last 4+ hours on the regular, and Houston’s benefited from having such a deep ‘pen. But the Braves just faced a Dodgers squad who threw a ton of relievers at them, and you know how that series ended. Atlanta’s hitting has been hot, but the Astros have just as much firepower as they do if not more.

These teams are really evenly matched and frankly I have no idea who’s gonna hoist the trophy in the end. I like the Braves as an underdog and I always find NL teams benefit more from the sudden addition of a DH than AL teams do when they have to go without one in NL parks. I think this goes seven games.

All I know is that Minute Maid Park will be rockin’ Tuesday night as the Astros host the Braves. Get ready for an action-packed series that’ll crown baseball’s best team in 2021.

Here’s what happens when a Hall of Fame pitcher stops...